As we approach the end of the first quarter of 2019, it is disappointing for the Society that this year looks set to see Green Belt casework continuing to dominate its Agenda:

Wirral Council was one of the three Councils selected by the Minister for Housing, Communities & Local Government (MHCLG) last year, for “Special Attention” due to their failure to deliver a Local Plan.  This resulted in the Council holding a ‘Development Options Review’ Consultation, last September, presumably to show it was taking action. This consultation centred on the Council’s proposal to release of some 8 sq miles of protected Green Belt land.  Whilst the Council stressed it only needed some of this land to satisfy targets, the release of any of it would automatically make it a target for the volume house-builders. The Council would then have difficulty resisting giving planning permission, should owners wish to sell any released land.  We noted the ‘Golf Resort‘ land at Hoylake was excluded from the Consultation – so we conclude the Council has already made the decision that it will approve its release, should a planning application be submitted.

We, along with some 19 other local societies (now the Wirral Green Space Alliance, (WGSA), have been very active in responding to this Consultation. However, we can’t understand why the Local Plan has continually been delayed, as we (amongst others) had responded to consultations carried out by the Council on two earlier drafts in recent years. , bto the release of any land that we know have been submitted.

Not only did the Council impose a tight timescale for the Consultation but also it was made even more confusing with the ‘official’ annual housing target figures changing from about 800 down to 450 which then later reverted back to 800.  Some 10 years ago, under the NW ‘Regional Spatial Strategy’, the annual number of buildings identified as being needed was only 250.  We are unaware that there has been any increase in the level of demand for houses and, with no new large employers setting up in the Wirral, we believe there will continue to be a net reduction in population.

The Society engaged a professional planner from CPRE to assist in our response.  She was able to refute the need to release any Wirral Green Belt land, given the amount of ‘Brownfield’ land available especially including the ‘Wirral Waters’ site.  She had also indentified that some of this ‘Brownfield’ land didn’t appear on the official Register, a deficiency we will follow up.

We are also meeting the Project Director for ‘Wirral Waters’ again shortly, to discuss progress on the various schemes they are developing.

The “essential” Fire Station at Saughall Massie has now started construction. Given that, if it becomes operational in a few months time, it will be some 5 years since the West Kirby station closed it still begs the question why it was necessary to spend some £4m of taxpayer’s money on moving operations one mile down the road from Upton, against the wishes of some 4,000 petitioners and Societies such as ours?

A Motion put to Wirral Council, to drop the Resort proposal was disappointingly rejected in December.  Despite a large public attendance at the Council meeting, the majority party voted to continue spending taxpayers’ money on it.

Much also continues to be happening, which isn’t being made public:  For example, it’s not clear now what the focus is for this proposed development.  Until recently, the ‘Hoylake Golf Resort’ was centred on the creation of a ‘Resort’ based upon golf breaks, with an hotel, practise facility and an ‘enabling development’ of 160 luxury houses.  Its purpose was to make Hoylake the “Capital of the North West Golf Coast”.  However, with the Council having to ‘offload’ a number of municipal courses due to the rapid downturn in golf participation, the Resort has now been re-branded as the ‘Celtic Manor’ Leisure Resort’ It appears to be more focussed on broader ‘leisure-related’ activities (whilst, of course, still retaining the plan to build 160 luxury houses in the Green Belt).

We also know the original house-builders, Story Homes, have now withdrawn from the project because of ‘a change in strategic direction’.  Interestingly, they continue to contact Wirral landowners looking for other Green Belt House-building Opportunities. The Resort house-builders will now be Redrow Homes. This Company currently faces public outrage in Liverpool, with over 50,000 people signing a petition to oppose Liverpool City Council’s plans to sell part of Calderstones Park to Redrow, to build 50 luxury houses there.

And it is understood that a number of environmental and financial reports are due to be presented by the Nicklaus Joint Venture Group to the Council early this year.  The Labour Cabinet will then decide if they wish to continue with the Resort project.  The Stop Hoylake Golf Resort Action Group (SHGRAG) question the ‘independence’ of these reports as they’ll be commissioned and paid for by the developer.

The SHGRAG hopes that the Council will look at other more sustainable options for the site. In particular, urging the Council to look seriously at the Hoylake Village Life’s proposal for a Wildfowl and Wetland / Eco Centre which is supported by the Wildfowl and Wetland Trust. This option wouldn’t require Green Belt housing, would bring in far more tourists and is, with the threat of climate change, a more sensible option for a Zone 3 (highest risk) flood plain site.

A spokesperson for SHGRAG says:

“we urge all residents who are against the Resort, with its plans to build houses on the flood plain and Green Belt, to contact the Councillors, particularly the Labour Group Councillors, to urge them to look at other options for the site.”

The Wirral Society supports this request. 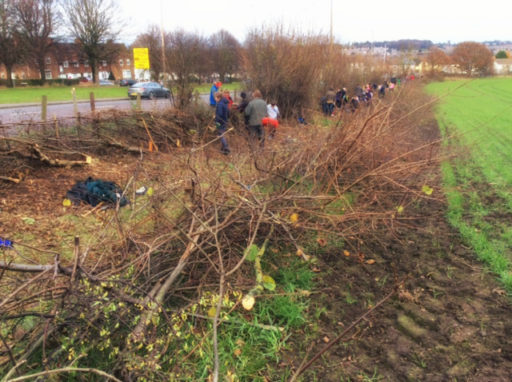 In the last issue, I reported how the Society is also contributing towards a 4-year hedgerow restoration project at a farm near Woodchurch, which started in November, with a Hedge-laying event. The event turned out to be a great success, especially as many of the volunteer hedge-layers were young people from nearly Woodchurch High School.  As the laying work will continue close to the Woodchurch Estate, it is planned there will be continued contact with the youngsters.

A year ago, I commented on how ivy was gradually taking over so many sandstone walls and trees – especially in this part of the Peninsula.  I made the point that “whilst it apparently doesn’t normally affect its host to any great extent, its vigorous growth enables it to take over wherever it grows.” Well, here is a recent example of how ivy, along with a strong wind, can lead to the destruction of a mature tree.

Thank you, Rod, for a very useful update. I wonder whether the majority party’s persistence over the golf project is now partly about saving face.

We live opposite the farm at Woodchurch where the hedge laying took place last November.It was clearly a group of dedicated people ,many of them young and well organised.Well done to everyone involved.