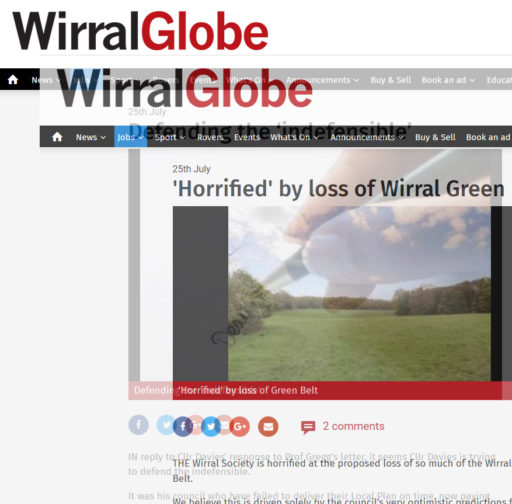 As the Wirral Council Local Plan disaster unravels itself to Wirral’s public, the Society finds itself in the letters page of the local press (Wirral Globe) with some hard-hitting points about how Wirral’s Greenbelt has been left to the threat of developers, thanks to Wirral Council’s untimely delivery of their Local Plan.

THE Wirral Society is horrified at the proposed loss of so much of the Wirral Green Belt.

We believe this is driven solely by the council’s very optimistic predictions for economic and population growth, for which there is no evidence.

The Government seem to have accepted this, and are now expecting Wirral to build over 800 houses in the borough each year until 2035.

The society is not opposed to housing development as such – only where it is in the wrong place, or is unjustified.

As the peninsula is geographically/administratively an island, there is no room for outward expansion, so our Green Belt is already doing its main job of separating townships.

Much of it is also in production as farmland – and we all need food!

The society would welcome more members to strengthen our voice to oppose this destruction.

Adding to the criticism is Society member, Nick Lauro:

IN reply to Cllr Davies’ response to Prof Gregg’s letter, it seems Cllr Davies is trying to defend the indefensible.

It was his council who have failed to deliver their Local Plan on time, now paying the price for being asleep on the job.

Instead of leaving this until the 11th hour, they should have been taking care of business, perhaps utilising those skills of the “best people” they hire on six-figure remuneration.

We hear incredible sound bites from the Council leader about the future panacea to all Wirral’s problems – the Wirral Growth Company – yet when it comes to basic obligatory housekeeping, like delivering a Local Plan, they fall at the first hurdle.

Wirral Council under its present leadership have brought this situation upon their own heads and they cannot simply blame Peel Holdings for putting our Green Belt under the threat of development.

The council made the decision to put all their eggs in one basket with Peel.

Did they not think to have a contingency plan, should their golden goose fail to lay all of its eggs?

It’s a bit like the naughty schoolboy failing to deliver his homework on time, despite repeated warnings of the consequences, then complaining when the teacher delivers the punishment for failure; except in this scenario, the whole class end up suffering.

We must stress, we are not the only people to write in with our concerns, there are many none-Society Wirral residents who also share our shock and anger at the way our elected representatives have left our Greenbelt wide open for assault. As always, we remain apolitical on this issue, though we do note the increase in heated exchanges by local Councillors of all political persuasions on the issue of the Local Plan.