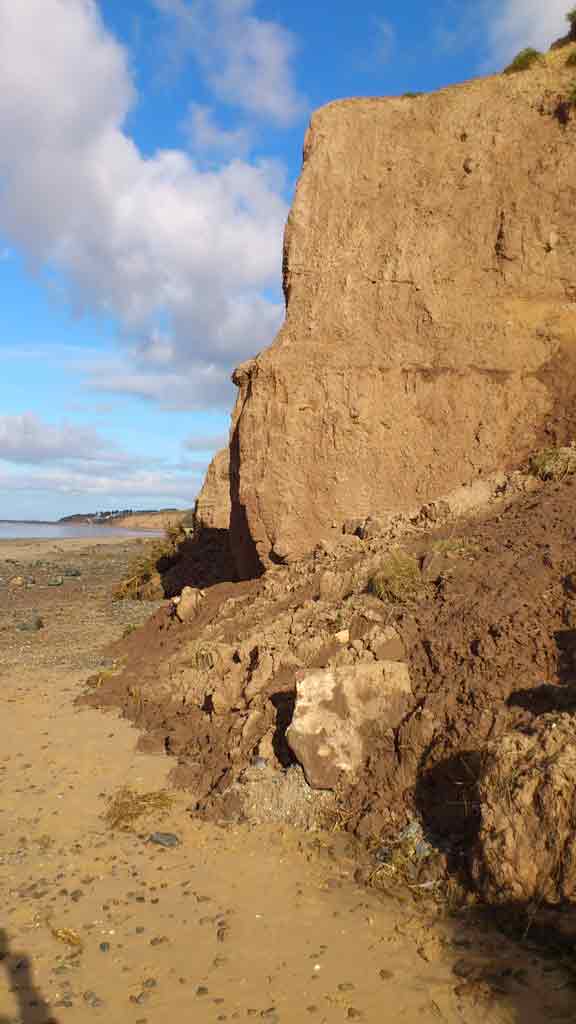 The west coast of Wirral is eroding – it’s official. Perhaps, one of the best areas to view this invasive activity is from the beach at Thurstaston, constantly at the mercy of the incoming tides sent up the River Dee from Liverpool Bay.

This was the subject of consultation between interested public parties and the Environment Agency back in 2009 when there was a Wirral Society presence in attendance at a meeting held in Hoylake to discuss the problem. The immediate result of discussions seemed to be to do nothing and let nature take its course, much to the chagrin of Caldy Golf Club, understandably alarmed at the prospect of their cliff-side greens being reclaimed by the unforgiving sea. At the time, the Environmental Agency representatives seemed to be under an assumption that current data pointed towards the prospect of the River Dee silting up further, to a point that the highest tides would recede away from the current cliffs, thus reducing the threat of the long-term disappearance of the coastline. Yes, we would lose some land, but possibly not to the point of major destruction of the coastline. However, this was 2009 and the Environmental Agency have since put the following information on their website about this part of Wirral for 2010 onwards:

On some areas of coast the management policy agreed in the Shoreline Management Plan is to ‘Hold the existing defence line’. In these areas, erosion predictions for the duration of that policy are not shown as erosion is considered to be negligible. However, this may be dependent upon the policy being funded and implemented, and defences being built or maintained.

They also have the following management policies in place for this part of the coastline:

Evidence of continuing erosion is visible in Q1 of 2013, judging by what lies at the bottom of the cliffs next to the area known as ‘Tinker’s Dell’ at Wirral Country Park, Thurstaston (OS Grid Ref: SJ2482).

Some sort of disused Sandstone farm building, probably 18th or 19th century, has tumbled down the cliff side onto the shore below! It was probably long demolished leaving just the lower wall, floor and foundations, but there is still quite a substantial amount of Sandstone waiting to follow a decent onto the lower cliffs as the tides continue to evade the predicted silting process.

It’s a bit of a mystery as to what this old building was originally used for. Was it a barn for livestock, storage or even a dwelling place? In mid February, there was what appeared to be some sort of Granite stone with a semi-circular worn groove (or was it deliberately carved?) in its base on the beach. By early March, this had been removed from the area, possibly by Wirral Country Park wardens for historical conservation purposes. It certainly seemed that the groove carved/worn in was deliberate and had once served a purpose.

If anyone has any ideas as to what this building was, please get in touch with us. As things stand (or don’t stand!), it appears that the silting process is way off the point of building up a protective bank of sand unassailable by high-tides. As the River Dee is in a constant state of flux regarding silt and the emergence of new Spartina Grass areas, who knows when we will see an end to the sea reclaiming land on this part of Wirral? The irony appears to be, one way or another, we have no choice in accepting the (mostly unwanted) Spartina Grass and sand dunes taking over areas where water once used to prevail, or risk losing higher ground to the unforgiving forces of Nature.